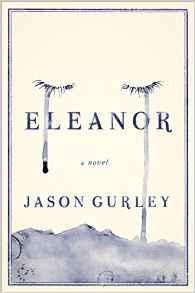 In 1962, a young mother finds herself pregnant again, to her dismay. Before her first pregnancy, she was a swimmer with reasonable dreams of going to the Olympics. After giving birth, her former coach discourages her from thinking about competing again. Living on the Oregon coast, she settles for swimming out to a tiny island and diving off the high cliff, with her husband watching over her from a boat. Then one day she drives to the beach by herself and swims out, never to be seen again.

Years later, the daughter she left behind, Agnes, mother of twin girls, is driving to the airport in a bad storm to pick up her husband when an accident takes the life of one of the twins. Years after that, the surviving twin, Eleanor, is now her mother’s caretaker, basically, as Agnes spends her days and nights drunk. When she is awake she reviles Eleanor for being the surviving twin, claiming it is Eleanor’s fault Esme died that day. Eleanor’s parents are divorced, but her father has been as present in her life as possible, trying to make her life with her mother as bearable as possible. It’s not an easy life, but it’s predictable, until one day when Eleanor steps through a door and finds herself in a different time and place. She returns, but finds herself changed. And it turns out not to be a one-time event. The travelings get stranger, and the consequences to Eleanor get drastic. What is happening? Where is she going when she leaves her own life, and why is it happening? Who is doing this to her?

The story is a fantasy with psychological underpinnings, and I found it gripping. While it is obvious from very near the beginning who is causing Eleanor’s travelings, Gurley takes his time explaining who the other character in that world is. There is a high degree of tension- Eleanor is really being badly hurt by her adventures. The problems I had with the story was that it’s never explained *how* the travelings are precipitated, and the end has a little bit of a deus ex machina element to it. But I found that acceptable in return for the rest of the story being outstanding.

Neither of these things influenced my review.
Posted by Laurie Brown at 11:25 AM