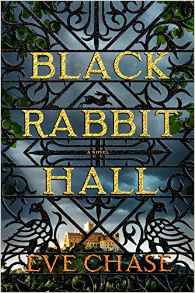 ‘Black Rabbit Hall’ starts off fairly slow; Lorna and her fiancé are looking for a wedding venue in 1999 or so, and Pencraw (the Black Rabbit Hall of the title) in Cornwall is first on her list, despite its decrepit condition and odd owner and manager. In 1968, young teen Amber Alton and her very happy and close family (Toby, her twin; young Barney; and baby Kitty) are leaving London for the summer at Pencraw, their ancestral estate. But it’s not long before things change; tragedy strikes the Alton family. The event shatters the close family; some do not have the coping skills to survive it. And the way the father choses to try and survive creates further problems that will echo through the years, intersecting with Lorna’s life.

The prose is lush and beautiful. Multi-sensory descriptions abound, allowing the reader to fully inhabit the story. While I had suspicions of how the story would wind up, it ended up surprising me. I stayed up late reading this book, and grabbed it again in the morning. Despite being set in the Cornish countryside and having no supernatural elements, it reads like a Southern gothic- at one point I thought it was going to go all ‘Flowers in the Attic’-ack. It’s family drama at its craziest, but with touches of sweetness.

It does have faults. While Chase has description and setting down pat, some of her character building is lacking. The wicked step-mother is pretty much nothing but wicked; she has not one redeeming feature or even any characteristic other than ‘wicked’. Father Alton is pretty one dimensional as well. Amber (the narrator of most of the story) is the most complex character because we spend so much time in her head; she’s got a good range of emotions and motives and I felt a lot of sympathy for her. Lorna, for some reason, is kind of blah even though she is the other main character. In some ways, she’s simply a device for the family secrets to be unveiled. Despite this character problem, the book is highly readable and compelling.


the above is an affiliate link. If you click through and buy something- anything- Amazon will give me a few cents.

Neither of these things influenced my review.
Posted by Laurie Brown at 2:39 PM