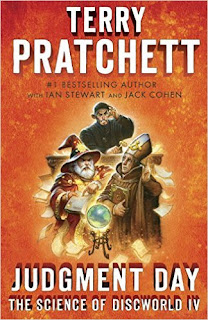 This volume of the Science of Discworld books goes over evolution, cosmology, and religion, among other things. The discussion of these things is presented if fairly straightforward terms that most readers will be able to understand without having to resort to Google too often. I’ve read several books on quantum physics and cosmology (and still remain boggled by the subjects) and have to say this book puts in a very understandable way. The heart of the book, though, is a thread that runs through all the subjects, and that is why do people believe in things that cannot be proved scientifically. Why do some cling to young earth theories that geologists assure them are not true, or feel that their religion, and only their religion, is real and true despite *not* being able to prove it? Their answer is that religion is human-centered, even though it tries to explain universe centered things. A human centered world view concentrates on the smaller things, on a human scale. Science says the universe is huge, cold, and doesn’t give a damn about humans. A universe centered view offers no comfort.

Like the other SoD books, the science is strung together with a weak Discworld story. And it’s very weak in this book. A couple of pages of story at the start of every chapter makes it a very short story, and it has no plot arc. A fair number of Discworld characters put in appearances, but it’s like they are just wheeled out to wave at the crowd and be gone. If you’re looking for an overview of the sciences presented in this book, it’s fine. But don’t expect a real Discworld story.

Neither of these things influenced my review.
Posted by Laurie Brown at 5:40 PM