All the Things We Never Knew: Chasing the Chaos of Mental Illness, by Sheila Hamilton. Seal, 2015 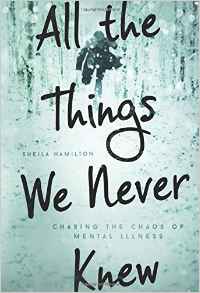 Newswoman Sheila Hamilton didn’t know David Krol all that well when they married- they were married and she was pregnant within a year of meeting- but many couples commit to each other that rapidly. So it’s not like she knew nothing about him when she committed her life to his. And it was several years into the marriage before she realized David had something wrong with him. She felt he had quirks, but she trusted him. He was running his construction business while she was doing first TV and then radio news and they had a young child; she didn’t have time to dwell on his mental oddness until it got bad. And even when things go bad, she still didn’t think of it in terms of mental illness; she thought he was just being a jackass. His family made no mention of mental illness (even though Sheila was to find out that other family members had issues, too).

The book follows David and Sheila’s relationship from happy newlyweds to strangers living in the same house, ready to divorce. During that time, David ran up hundreds of thousands of dollars in debt, didn’t do necessary business paperwork, didn’t finish jobs which meant the homeowners refused any payment, and was unfaithful. Through it all, though, he remained devoted to their daughter, who was nine when David killed himself. He tried hard- although he failed most of the time- to be a good father to her.

That David was eventually diagnosed with bipolar disorder and that he committed suicide is no secret; it’s right on the book cover. Despite knowing this, I read the story tensely and breathlessly; I couldn’t avoid hoping for a happy ending even though I knew better. Hamilton’s writing drew me in and made me feel what she felt during this horror story. An amazing book.

The above is an affiliate link. If  you click through and buy something- anything- Amazon will give me a few cents.