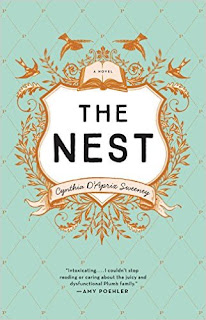 The ‘Nest’ of the title is a trust fund, established by Leonard Plumb, Sr. as a nest egg for his children, not to be distributed until the 40th birthday of the youngest. He died young, and so did not live to see the funds grow exponentially through the years to a sum well beyond what he expected. This was supposed to be just a nice addition to their incomes; he expected them to do at least as well in life as he did. But Plumb’s offspring haven’t done nearly as well as he thought they would; Leo is the only one to make money and he’s just screwed up royally. After going through most of his own money, he has just had a drunken car accident with a 19 year old girl’s hand around his penis- and the girl has been badly hurt. The Plumb’s mother, Francine, the only person with access to the Nest, has just burned through the majority of it buying off both Leo’s bad mistake of a wife and the injured girl in the name of keeping the story out of the news, as well as sending Leo through rehab. Now the time for the funds distribution is coming up, and the other three siblings want to know how Leo plans on repaying the money; they all have desperate need for it.

This book is an examination of family dynamics, couple dynamics, and the problem with assuming that a deus ex machina will solve their problems. What will they do when they realize that they must solve their own problems and save themselves? Will they survive? Can they manage to reveal their secrets to their families and stand on their own two feet?

I normally I loathe stories that revolve around lies and secrets, but I found myself totally enthralled by this dysfunctional family. They are not bad people; they are average folks who’ve screwed up. The author emphasizes the need for families to keep talking to each other, and that things are easier to deal with when you don’t keep them secret from those closest to you. And, most important, that families can heal.

Neither of these things influenced my review.
Posted by Laurie Brown at 3:02 PM