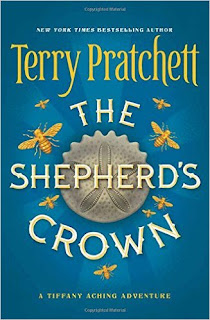 “The Shepherd’s Crown” is the last book Terry Pratchett wrote. It’s also the last of the Tiffany Aching series, which are my favorites of the Discworld series. Following Tiffany as she grows and learns has been touching and humorous. In this book, she experiences a great loss, which leads to her having to make a big decision about her life. Pratchett’s version of being witch- to, as he says, do the good in front of you- sets well with my version of how life should be and what makes someone a good person. So I was delighted to discover that there was one more in the series that I thought had ended with the 4th installment.

The book is not up to Pratchett’s usual standards. It was, basically, unfinished when he died. He had an outline, and certain scenes had been written, but a lot of it is bones with no flesh. It lacks the life and fullness that his writing usually had. But… what is filled out I found marvelous. It’s about being strong, and doing for other people and letting them do for you, dealing with the inevitability of death, and learning to be your own person. It’s about sometimes having to go against one’s normal beliefs when you have to protect others. Some parts that were unfinished make for jolting reading; the story arc of the Queen of the Elves seemed forced, and it ended suddenly in a way that totally surprised me. I suspect that she would have been given more time to transform had the book been finished. Likewise, I think Geoffrey would have been given more to do, and something more done with You, Granny Weatherwax’s cat. But even though it has a lot of rough places, I can’t help but give the story five stars for effort, atmosphere, and moral.

Pratchett apparently knew this would be his last Discworld novel, and a large number of characters from that universe make appearances- some barely cameos- but all saying goodbye to a beloved character and also to the reader. It’s sad to say goodbye to Discworld, although it will live on a long time, I suspect, as new readers discover the world that rides on the tortoise.

This did not alter my review in any way.
Posted by Laurie Brown at 5:36 PM