The Queen of the Night, by Alexander Chee. Houghton Mifflin, 2016 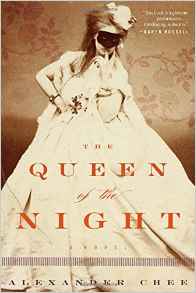 The narrator of this novel cannot get a break. Born on the American frontier, she is hopeless at the tasks normally assigned to girls. Her singing voice is sublime, though- and her mother won’t let her use it, saying she has the sin of pride, even going to far as to tie her mouth shut. When her whole family dies of fever, the issue is moot; she leaves for the coast to find a way to get to Lucerne, where her mother’s people are. To get there, she joins a circus, doing trick riding, shooting, and singing. On the way she steals a name from a gravestone, Lilliet Berne. Her adventures include being a maid to the Empress, an unknowing spy, a courtesan, and an opera singer. She changes identities with ease. But every time she thinks she’s got things under her control, the floor gets pulled out from under her. In her life, she only loves one man… and can never seem to get free to spend her life with him.

The story actually begins when Lilliet, now an acclaimed opera star, receives a novel, which clearly tells the story of her life, exposing all her secrets. There are only three people in the world who know this story, and she must discover which one of them it is. It shouldn’t be hard; one is dead, one loves her, and one wants to own her. But finding who it is leads to a still greater web of secrets. She may end up dead or enslaved again.

Lilliet is the narrator of her story; she speaks clearly and does not spare herself. She describes things vividly, whether it’s about things royal and beautiful or poor and dreadful; how things look, feel, sound, smell. The prose is lush, and envelopes the reader in the story.

I loved this book. I did not want to put it down, and did not want it to end. Lilliet is an ingenious survivor, a strong woman who does what it takes to make a decent life for herself, even when she seems totally trapped.

Neither of these things influenced my review.
Posted by Laurie Brown at 4:27 PM