The Science of the Magical, from the Holy Grail to Love Potions to Super Powers, by Matt Kaplan. Scribner, 2015 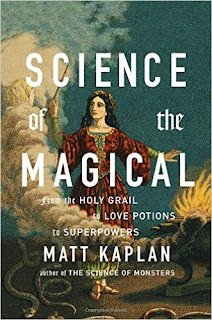 “The Science of the Magical” is exactly what the title sounds like: explanations for things people have called ‘magic’, both in the past and present. The book ranges widely; he covers transforming into animals, healing pools, oracles, animals with uncanny behaviors, berserker warriors, near death experiences, Captain America, things from ancient history to modern days.

Kaplan is a science writer, and as such has a lot of contacts in all areas of science, which helped a lot in his investigations. Some things are fairly easy; hot springs made people feel better simply by being warm in areas and times that were really hard to stay warm enough in. Hot water helps many cases of sore, aching joints. No real mystery there. Predicting the future by watching the movements of birds was a little harder, but he makes a good case for birds being able to sense which way the winds are prevailing. It turns out that shifting currents can mean a winter either colder or warmer than usual, depending on which way it’s moving, much as El Nino/La Nina means for us in the Pacific Northwest. The birds are just following the winds. The Oracle at Delphi has been pretty well explained before; the cave she did her prognosticating in had a crack in the floor that exhaled toxic fumes that caused oxygen starvation in the brain. Super soldiers close to existing, between amphetamines to keep[LB1]  soldiers awake and provide focus, steroids to enhance strength, and drugs that increase red blood cell count and thus the amount of oxygen present in the blood- shades of Lance Armstrong there!

The author writes in a clear, accessible style. He always stays respectful of the culture from which the magical belief comes from. He’s very witty as well as well educated. The book reads like what you’d get if Terry Pratchett actually wrote a science book (instead of teaming up with science writers)- especially in the footnotes. Fast and fun to read.

This in no way influenced my review.
[LB1]
Posted by Laurie Brown at 5:24 PM