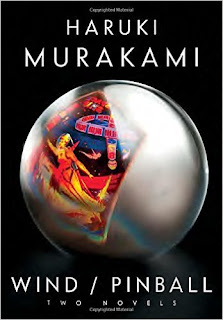 “Hear the Wind Sing” is the first thing Murakami wrote, back in 1979. He just got the idea he should write a novel, then sat down and did it. The book is short and fairly undeveloped; hardly a novel at all. I’m really surprised it got published. He wrote “Pinball, 1973” directly after “Wind”, and the difference is amazing. That the author learned so much about writing so quickly is almost unbelievable. The characters in “Pinball” (some of whom are the same as in “Wind”; it’s a sort of sequel) are developed and have depth. It’s like “Hear the Wind Sing” was just an outline, whereas he actually got around to writing “Pinball”. The really odd part about these stories? Murakami himself doesn’t like them and really didn’t want them published in English.

Both stories revolve around an unnamed young man and his friend, the Rat. Both are narrated by the nameless man in the first person, but the sections about the Rat are written in third person- the two are never even in the same scene in “Pinball”. There is little plot in either tale; they are simple strings of events. In “Wind”, the narrator is home from college for the summer and hanging out with the Rat in a bar run by J; in “Pinball” the narrator has graduated and set up a translating business with a partner. He is living with a pair of mysterious twin women who just sort of show up one day, and searching for a pinball machine he played obsessively in college. “Pinball” has that touch of surrealism that Murakami does so well. The characters are drifting through life, unattached to family, mostly content to let life happen to them- even if they are unhappy with it. I don’t think these stories would be good introductions to Murakami’s work, but for a fan, they are important to read.

The above is an affiliate link. If you click through and buy something- anything- Amazon will give me a few cents. This in no way influenced my review.
Posted by Laurie Brown at 3:57 PM