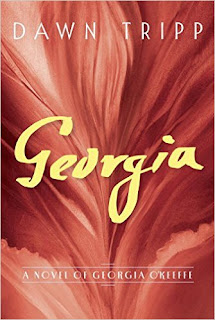 This novel tells O’Keeffe’s story from her own point of view, as an old woman looking back on her life, starting from the time she was 27 and had sent some charcoal abstracts to Alfred Stieglitz in New York to get his opinion. A correspondence sprang up between then, and one day, after learning Stieglitz had mounted a show of her work, she walked away from her job as a teacher in Texas, withdrew her bank account, and took the train to New York to see it. It turned out that the show had just been dismantled; the studio, 291, was closing because of the war. But the relationship that had already started on paper bloomed in person, with Stieglitz rehanging her paintings just for her to see. By the time Georgia left to return to Texas, they were passionate about each other, a passion that would remain throughout their lives with all its ups and downs.

A lot of the story is about Georgia’s love affair and marriage to Stieglitz; her work was shown and sold through him so he is inextricably bound to her professional life. Their marriage might have been passionate, but it was a troubled one. He wanted to support her work in every way (except by being someone she could trust, martially), but also seemed to fear her being on her own. They had a dependence on each other; she more dependent on him at the beginning; he more on her, later.

The writing is intense and rather amazing. Tripp wrote this after O’Keeffe and Stieglitz’s correspondence was published, and she combed their letters thoroughly. In some spots, she has used their own words. The thing that impressed me the most was the author’s ability to describe painting; how it felt to put charcoal or brush to paper or canvas, how the colors sat against each other, how the creative urge felt. How it felt different to do the lush flowers, the desert landscapes, the abstracts. I really felt that I was inside O’Keeffe’s mind as she thought back on her life.

Neither of these things influenced my review.
Posted by Laurie Brown at 12:17 PM