How to Be a Victorian: A Dawn-to-Dusk Guide to Victorian Life, by Ruth Goodman. Liveright Publishing, 2013 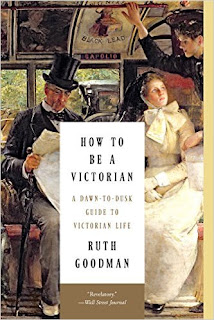 As a social historian and TV presenter, Ruth Goodman has lived the life of the Victorians at times. She learned the skills, wore the clothing, ate the foods, and groomed herself in the way of the 19th century for weeks at a time. Here she presents the day to day life of the Victorians over a range of economic classes and geographic areas.

She takes us through a typical day; rising and washing up comes first. While the Victorians didn’t have showers, they weren’t filthy, stinky people. I was surprised by the methods that they used to clean their hair and skin; it was labor intensive but apparently effective. A thorough description of clothes worn is given; there were many layers, and by the end of the book we know how they were made, how they were cleaned, and how they felt to be worn. We learn how the meals were made and what they consisted of (usually not much, except for the highest classes, and sometimes not even then). Transportation, human waste disposal, how children were reared, what jobs they had, and what they did in their leisure time- what little there was of it for most of them.

It’s the ultimate resource for the historical novelist who sets their work in the 19th century. It’s fascinating to find out about the details of daily life- not who was king or what battle was won, but how most of the population lived. That Goodman tried out the various activities and concoctions- recipes for hair gel and toothpaste, for instance- let us know what it was really like. In many cases, what it was like was ‘not good’, but there were a large number of surprises. Great book.

The above is an affiliate link. If you click through and buy something- anything- Amazon will give me a few cents. This in no way influenced my review.
Posted by Laurie Brown at 3:16 PM