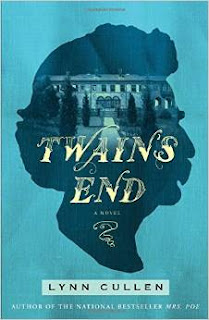 In 1909, Samuel Clemens- Mark Twain- first blessed the marriage of his secretary, Isabel Lyon, to his business manager, Ralph Ashcroft, and then, one month later, fired them both and went on a rampage of invective against Lyon. Why did he do this after she’d served him for seven years? He claimed- in newspapers as well as in a 400 page manuscript- she stole from him, she was a drunk, she lied, and that she had attempted to seduce him. He took back the small house he’d deeded over to Lyon and her mother. Clemens and Lyon had previously enjoyed a close- some in the household said too close- relationship. What happened?

Most took Clemens’ version at face value. But author Cullen had access to Lyon’s diary that she kept during her time in Clemens’ employ. A very different story emerged from that, one that clears Lyon’s name. This novel brings Lyon’s time with Clemens to life and shows us a side of Clemens not usually seen: how he hated the persona of Mark Twain that he had invented to charm the American public, a persona he felt obliged to keep alive no matter what it did to his family. And he was a man who constantly sought attention and love.

The story covers the time of his beloved wife dying; his collecting of young girls as ‘angelfish’; the death of his daughter Jean; his meeting with Helen Keller, Anne Sullivan, and Sullivan’s husband John Macy; the affair of his daughter Clara with her married musical accompanist and her subsequent marriage to another man, and Lyon’s own marriage. Cullen’s use of period details- dress, home décor, transportation, and more- bring the story to life. Lyon emerges as a good woman who has the misfortune to love someone unsuitable for her; Clemens seems to be a considerably darker figure that the Mark Twain we are introduced to in school. Very interesting if sad story.