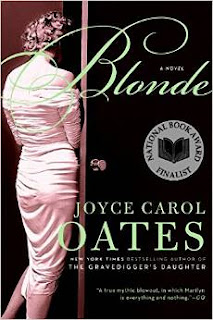 “Blonde” is about the quintessential American blond icon: Marilyn Monroe. It’s a fictionalized biography that is grounded in research but takes off into imagination; inventing love affairs, merging multiple people into one archetypal persona, and looking into the mind of MM. Not just into her mind; into her heart and soul. Somehow, Oates manages, with her dense prose, to put the reader in Norma Jeane’s self, and feel everything she feels. It’s not a pleasant place to be, but it’s un-put-downable.

The novel is slow at the beginning but picks up steam rapidly; Oates goes into detail about Norma Jeane’s childhood. It was a horrible childhood (as MM’s childhood was) and the prose takes us deep into just *how* horrible it was. MM’s disastrous teenage marriage, her discovery by a photographer, her early Hollywood days and being forced to provide sex for the studio bosses, and her success at great cost are all detailed. Not a drinker and against drugs, she ended up drinking heavily and taking uppers, downers, and who knows what else to get her through her days on the set and the social appearances that were demanded of her. Through it all, all she really wanted was for someone to love her, the true her, Norma Jeane, not the cardboard cutout Marilyn Monroe. She only got that once, for a very short time, and turned it down when it appeared.

At over seven hundred pages, “Blonde” is not a light read, but it’s pretty fast for how dense it is. It haunted my mind for days after finishing it. I’ve read several biographies of Monroe, and none of them really gave me the feel of her life like this novel did.

The above is an affiliate link. If you click through and buy something (anything), Amazon will give me a few cents. This did not influence my review.
Posted by Laurie Brown at 3:25 PM