The Rest of Us Just Live Here, by Patrick Ness. HarperTeen, 2015 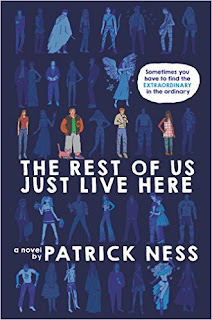 Think of an episode of ‘Buffy the Vampire Slayer’ taking place, with creatures blowing up the high school, people being killed, and strange things happening. Now think about the people who are living with these events, but aren’t part of the Scooby Gang, people who aren’t in on the secret events, people who don’t have special powers to save the world. This book is about those people. Sounds boring? It’s not.

Mike Mitchell is our narrator. He has OCD, and is in love with his best female friend, Henna, but she doesn’t know it. Or doesn’t admit to knowing it. His sister, Mel, had anorexia but is in recovery. Their kid sister, Meredith is possibly a genius. Their father is a fairly useless drunk, with basically no involvement in the family, while their mother is a politician, who seems to regard her family as a political asset or liability. She’s extremely unlikeable. Mike’s best friend is Jared, who is gay, and just happens to be the grandson of the Goddess of Cats. This makes him very attractive to cats, including mountain lions, and gives him the ability to heal others. He’s the odd man in this circle of friends; he has superpowers, but isn’t involved in the supernatural crisis. He’s considered a normal kid. That bit seems pretty strange.

Every chapter starts with a few lines about what the super friends- the indie kids, as they are called- are up to with the aliens/demons/whatever. Mike and his friends aren’t even interested in what’s happening on that front. Mike hits a zombie deer with his car, and while it seems odd, he’s not really concerned about the fact that the deer is a zombie. All he wants to do is go to the prom with Henna, and graduate without the school getting turned into a hellmouth or something.

The story amused me. On the cover we see a bunch of teenagers, the four in color being Mike & Co, while in monochrome are a girl with a stake, a kid with a wand and cloak, someone with a bow & arrow, someone sparkly, and a lot of others- the people from all the supernatural YA books, movies, and TV shows. They are in the background, while the normal kids are the focus. The story is totally character driven, and the kids really come alive. Mike annoyed me at times with his neediness, but that is a part of his anxiety complex that drives his OCD. I understand that. I have OCD, too, and it was nice to see it accurately portrayed. I don’t know if the author’s other work has the dry humor this one does, but I’ll be reading some to find out.

Neither of these things influenced my review.
Posted by Laurie Brown at 5:20 PM