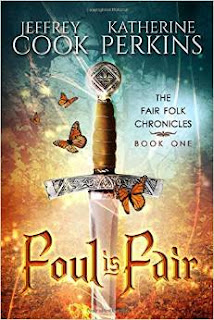 ‘Foul is Fair’ has some of the common tropes of young adult fantasy: the teenager who finds that she is not completely human, but a fairy princess; being thrown suddenly into another world full of dangers; the main conflict revolves around the Sidhe, Irish fairies. But this novel is different from most. Megan has ADD, and her mother has her medicated into a state where she can concentrate on her schoolwork- which sadly removes the artistic part of her personality. There are more magical beings than just the Sidhe; Hawaiian magic is also present, as is a pixie (originally a Cornish being), some golems, and a being who is most likely from Greek mythology- or not. This made it a lot more interesting for me; I enjoyed seeing the different traditions working with each other and refusing to be pigeon holed.

The action starts almost immediately; we have no backstory at the beginning. We only learn about Megan’s mother and father as the story goes on. Megan and her best friend Lani- who has grown up knowing about the other worlds and magic- work together very well, each using her strengths. Megan’s long absent father is being held prisoner; Megan, Lani, and Megan’s new friends must rescue him. No one ever stands still for more than an instant; the story moved so fast I read it in a day.  Given the age of the protagonists, I’d say this book is marketed to young adults, but I had no problem getting pulled into the story. There is no ‘heroine is smart; adults are dumb’ line in this book; everyone is pretty equal (except that Megan’s mother keeps such close tabs on her it’s suffocating). At the end of the story, Megan is back in her mundane, medicated life with her OCD mother. I can’t wait  until the next volume comes out- Cook and Perkins has to get that poor girl off all those pills permanently!  I had the pleasure of meeting Mr. Cook at the Sandpoint Costume Con when he did a reading and I immediately fell in love with the book