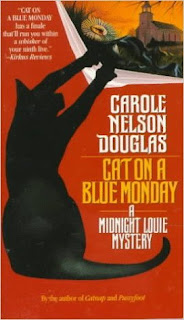 In ‘Cat on a Blue Monday’, there is always something happening. The action never stops, as Midnight Louie, the 19 pound, black tom cat meets his upstairs neighbor, a psychic cat who warns him that a gathering of cats is in danger. Meanwhile, at a cat show, a prize Birman is found shaved, putting it out of the running for a prize. Louie’s human, Temple Barr, is taking self-defense lessons from their attractive male neighbor- who is also being tapped by the local convent to find out who is making obscene phone calls to them. The cat rescuer next door to the convent is being hassled at night by sounds at the windows. One of the convent cats is crucified on her back door (the cat lives). Are any or all of these things connected? Is the death of the cat rescuer the accident it appears to be? And is small, black Midnight Louise, whose father deserted her mother and family, related to Louie?

Louie talks like a film noir character, which takes the story at least part way out of the ‘cute’zone. Temple is resourceful and brave and, while short, gorgeous and addicted to shoes, comes close to falling into the ‘cute’ zone but narrowly avoids it. It was a fun, griping read and I enjoyed it much more than I did the first Midnight Louie book. I’ll now be on the lookout for the later books in the series!

The above is an affiliate link. If you click through and buy something, Amazon will give me a few cents. This in no way influenced my review.
Posted by Laurie Brown at 5:21 PM