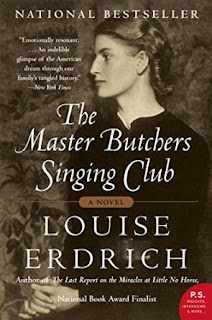 This book follows a large number of characters: the master butcher Fidelis Waldvogel; his wife, Eva; motherless Delphine who has returned to her upper mid-western hometown and finds herself stuck; her partner, Cyprian, who loves her but prefers men; Delphine’s alcoholic father, who may have killed three people- but he can’t remember; Delphine’s best friend, Clarisse, who is the undertaker and is being sexually harassed by the sheriff; Step-and-a-Half, a junk collecting woman who has secrets; and the Waldvogel’s four sons. The story follows their lives and relationships from 1918 to 1954, entangled with each other in so many ways. One of the things that takes center stage in the book is the predicament of German-Americans as Hitler rose to power and during WW 2. There were divided loyalties, as the Waldvogel family shows. Families were torn apart as they were forced to choose between nation and family, and even fight family member to family member.

I’m of two minds about this book. On the one hand, the prose is just so lovely that reading it was a joy. It’s like looking through a jewel box. But on the other hand, despite the length, a lot of the characters seem to be fairly impenetrable. Delphine, even though she is the main character, we seem to only skim the surface of. Delphine’s best friend has a huge event happen to her, but the effect in the story is negligible. The reveal at the end is momentous, but we have no idea WHY Mazarine’s mother did what she did years before Mazarine was born. Was she unaware of her state? Did she not care? How did Mazarine manage to survive her lack of care? The book is not boring- far from it- but it seems to lack something. In the end, I wanted to know more about these people than the author gave us.

The above is an affiliate link. If you click through and buy something, Amazon will give me a few cents. This in no way influenced my review.
Posted by Laurie Brown at 2:57 PM