First Chapter First Paragraph Tuesday Intros hosted by Diane at Bibliophile by the Sea, where bloggers post the first paragraph(s) of a book they are currently reading or planning to read sometime soon.

Today's book is The Master Butchers Singing Club, by Louise Erdrich. It's been laying in my TBR pile for sometime and made it's way to the top . . 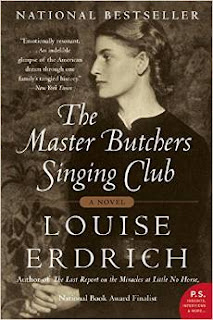 "Fidelis walked home from the great war in twelve days and slept thirty-eight hours once he crawled into his childhood bed. When he woke in Germany in late November of the year 1918, he was only a few centimeters away from becoming French on Clemenceau and Wilson's redrawn map, a fact that mattered nothing compared to what there might be to eat. He pushed aside the white eiderdown that his mother had aired and restuffed every spring since he was six years old. Although she had tried with repeated scrubbings to remove from its cover the stains of a bloody nose he'd suffered at thirteen, the faint spot was still there, faded to a pale tea-brown and shaped like a jagged nest. he smelled food cooking- just a paltry steam but enough to inspire optimism. Potatoes maybe. A bit of soft cheese. An egg? He hoped for an egg. The bed was commodious, soft, and after his many strange and miserable beds of the past three years, it was of such perfect comfort that he'd shuddered when first lying down. Fidelis had fallen asleep to the sound of his mother's quiet, full, joyous weeping. He thought he still heard her now, but it was the sunlight. The light pouring through the curtains made a liquid sound, he thought, an emotional and female sound as it moved across the ivory wall."

What do you think?  Would you continue reading?

I bought the book because I've liked Erdrich's other work. Her writing is so full of detail it makes me feel like I'm really in the scenes. Sometimes that's good- like the above- sometimes it's heartbreaking.