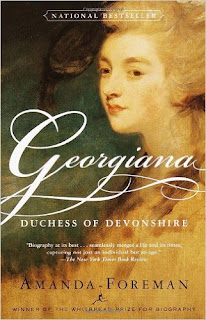 Georgiana Spencer, born in 1757, was not your typical court lady of the time. She was seventeen when she married the 5th Duke of Devonshire, twenty years her senior. Like many men of the time, he made no pretense of being faithful, but the Duke went further than usual. He fell in love with Georgiana’s best friend, Lady Elizabeth Foster, and moved her into the house. The three lived together for the next 25 years. Georgiana loved Bess as much as the Duke did, so it was not the horror story that some have made of it. Whether Georgiana and Bess were lovers is not known, but they seemed satisfied with sharing the Duke.

Her living arrangements (and her own love affairs) have overshadowed the fact that Georgiana was very politically active. In a time when women could not vote, Georgiana held parties to sway political affiliations and lobbied hard for the Whig contingent and was very politically influential. Living in the turbulent time that King George III was slipping in and out of madness meant various political factions were jockeying for power, and Georgiana had the ability to create a spectacle to attract people.

Georgiana was always in debt. She was a gambling addict and ran up tremendous IOUs; but she was also extremely generous with money to her friends and family. The Duke bailed her out many times and still, she died in debt. She was also an amateur scientist and a collector of mineral specimens. Her interests were far ranging.

She was a fascinating woman and a lot of correspondence was left from, to, and about, her. This helped the author, along with a huge list of books, bring the Duchess to life. Parts of the book are fast reading; the parts about politics were, to me, slow going and frankly bored me, but necessary as so much of Georgiana’s life was about politics. Not the easiest read but well worth the effort.

The above is an affiliate link. If you click through and buy something (anything, not just this book) Amazon will give me a few cents. This in no way influenced my review.
Posted by Laurie Brown at 1:14 PM