The Swans of Fifth Avenue, by Melanie Benjamin. Delacorte Press, 2016 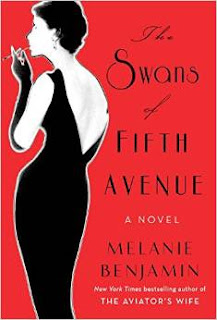 The ‘Swans’ of the title are the ultra-rich women of 1950s New York, who float serenely through their lives of fashion, lunch, and parties- while paddling like hell below the surface to keep themselves together. These women- Babe Paley, Slim Keith, Gloria Guiness, and Pamela Harriman- dominated the covers and pages of Vogue. Professional beauties, they existed to make their powerful husband’s lives lovely and effortless. These were thoroughbreds who had married their way to the top.

Truman Capote entered this group when he was a rising star in the literary sky. His sparkling- and sometimes vicious- wit endeared him to them. They adopted him, gave him expensive gifts, invited him to everything, and took him on vacations with them. Their husbands didn’t care how much time their wives spent with Capote because he was flamboyantly gay; he was their palace eunuch, their petted and cossetted lapdog. Or so they thought.

Babe Paley and Capote formed a special bond; both the children of icy, emotionally distant mothers, they never felt they were quite good enough. Babe strived to be perfect for her husband Bill, the founder of CBS. She imposed rigid control over her life and her looks. With Capote, she could relax her control and be herself.

No one expected the betrayal. Capote, having reached the heights of literary acclaim with ‘In Cold Blood’, couldn’t seem to come up with another book. Perhaps it was desperation that made him do what he did: he wrote a short story for Esquire magazine, titled ‘La Cote Basque 1965”. The Swans found their stories, their words, their confidences, and their affairs, spread out over the pages for the world to see. As anyone but Capote would expect, doors were shut against him forever, including that of Babe Paley, who was dying of lung cancer. The glittering life he worked so hard to achieve was gone in a day.

The book fascinated me. Benjamin’s descriptions of the homes, the clothes, the hair, the beauty routines, the lunches, and most of all the bitchy gossiping, are all wonderfully described. Capote’s slide down to becoming a drug abuser takes the back seat to the Swans, but is equally important to the story. I just have to wonder: even with his massive ego, why in the hell did Capote thing he could get away with writing about the Swans in the way he did?

Neither of these things influenced my review.
Posted by Laurie Brown at 9:53 AM