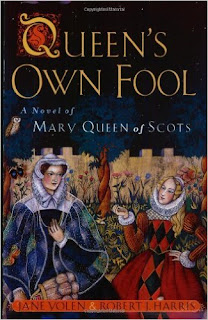 “Queen’s Own Fool” is Nicola, who is given the nickname ‘La Jardiniere’. La Jardinaiere was real, although we know almost nothing about her. Yolan and Harris have used her as a lens to view the life of Mary Stuart, the Queen of France and of Scotland.

Mary, at the time Queen of France, buys orphaned Nicola from her uncle’s entertainment troop when she is a girl. Nicola is witty and, more important, honest. Mary values honesty above all- she hears so little of it at court- and relies on Nicola to remind her that she, despite being Queen, is mortal like her subjects. The novel takes us through the death of the young King of France and Mary’s decision to live in Scotland, so she can rule rather than being an extraneous female for her uncles to marry off to further their political aims. This turns out to be a bad decision; Scotland is full of internal strife between Catholics (which Mary is one of) and the Protestant rebels. She walks into this situation fairly blindly and makes her situation worse by marrying pretty boy Lord Darnley. No one likes Darnley; he’s ambitious politically but mannerless, forces himself on serving women, cares nothing for the people of Scotland, and rather reminds me of Donald Trump. Mary is helpless as rebels take over the country.

I’ve never much cared for Mary Stuart; she always struck me as fairly witless and ruled by her heart rather than attempting good governance - not good traits in a queen. Seeing her through Nicola’s eyes, though, I could see other sides to Mary; she was kind and smart (in book learning, at least). She was a woman in the wrong place at the wrong time; a pawn of first her uncles, then the rebels, then prisoner of her cousin Elizabeth I of England. Other than her years at the court of France, she led a pretty sad life. Nicola’s version of Mary made me sympathetic to her as a woman who cared deeply for her friends and her people.

Nicola herself is witty, brave, and fast thinking. She acts as Mary’s eyes and ears when Mary is held prisoner and helps her out of several scrapes. Nicola is almost too good to be true, but I enjoyed her and think she makes a great heroine for the YA crowd for which this book was written. This was a fast, couldn’t put it down read for me. While I knew there could be no happy ending for Queen Mary, I couldn’t help but be rooting for her and being tense over a lot of the scenes, hoping for the best. Great book.

The above is an affiliate link. If you click through and buy something- anything- Amazon will give me a few cents. This in no way influenced my review.
Posted by Laurie Brown at 3:35 PM