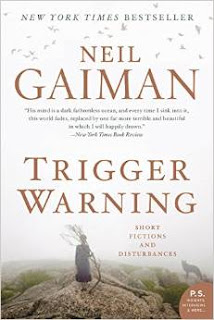 “Trigger Warning” is a collection Neil Gailman’s short fiction. Pretty much all of it has been published elsewhere; the only exception, I believe, is “Black Dog”, the last story in the collection. It’s set in the world of “American Gods” and is an adventure one of the characters has after that book ends. It’s my favorite of the lot; it deals with an ancient force that may be more powerful even than Shadow.

The other stories are uneven, as they are in any collection. One, “Orange”, breaks with narrative form. It’s the tale of the unfortunate transformation of a teenaged girl, as told by her younger sister, and we only see the answers she makes to a questionnaire. It’s very effective and very funny. There is also a Sherlock Holmes story, one about Jerusalem syndrome, an homage to Ray Bradbury that’s touching, a marvelous story about time travel, a tale of an uninventor who makes annoying inventions go away (oh, how I wish he were real. I’m looking at you, The Clapper), a Dr. Who story (11th doctor), the fairy tale of Snow White and Sleeping Beauty, and a man who finds that his made-up girlfriend has come to life, which is not nearly as good a thing as it sounds like. There is also some poetry; I don’t know or appreciate anything about poetry so I shall refrain from commenting. Not nearly as atmospheric as his novels, but quite good.

I received this book free from the Library Thing's Early Reviewer program.

Neither of these things influenced my review.
Posted by Laurie Brown at 4:55 PM