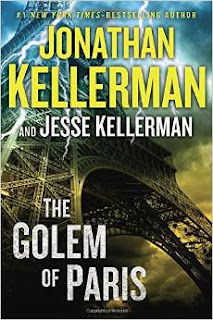 “The Golem of Paris” is a much, much darker tale than its predecessor, “The Golem of Hollywood”. At the end of that story, protagonist Jacob Lev found out that his mother, Bina, who he thought had died when he was a child, was alive, catatonic, and locked up in a mental institution.  This book is in large part her story, of what she went through that drove her mad – and how it ties into the mystical Golem storyline.

The other main storyline is the police case that Lev is on. Assigned to scanning and digitizing cold cases in an old warehouse, he finds himself intrigued by a gruesome ten year old case of the murder of a mother and son. It’s a very unique MO, and Special Projects (the division of LAPD that Lev became of part of in TGOH, which seems to be staffed mainly people who may not be quite human) okays him to go to Paris to investigate.

Like TGOH, TGOP is all over the map. Millionaire Russians, a really intense fight scene that seems unwinnable, Czech black ops, the supernatural; it’s all in there. Like TGOH, TGOP does not resolve all the issues by the end, but Lev (and us readers) have learned enough to make us even more avid to find out how it all resolves. What exactly are the Special Projects people? Why is the spirit of the Golem so dangerous? And what else is Lev’s father, a rabbinical scholar, hiding? He hid that Bina was alive and that he and Jacob are direct descendants of the Rabbi of Prague; there has to be more. He’s in the story too much *not* to be more than he appears.

The story can be hard to follow at times. I found myself having to go back to the start of chapters frequently to figure out exactly who and when the scene is about. But I found it worth the effort. Looking forward to seeing where this series takes us.

I received a copy of this book free from the Amazon Vine program in return for an unbiased review.

Neither of these things influenced my review.
Posted by Laurie Brown at 12:16 PM