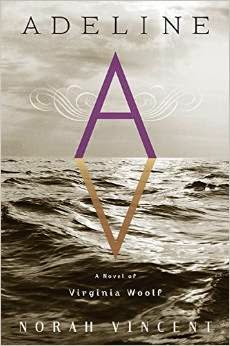 Adeline was Virginia Stephen’s given first name, but as it was her dead aunt’s name, it hurt her mother too much to use it. So she was Virginia from the start. In this novelized biography of the last fifteen years of Woolf’s life, Adeline exists inside Virginia her whole life as a separate personality to absorb the abuse she endured from her step-brother and to deal with emotionally upsetting events. Virginia talked to Adeline as if she existed outside of her body.

Written mainly from Virginia’s point of view in the present tense, Vincent has done a good job of allowing the reader a look at how Virginia might have felt at times when she held conversations with her younger self and with friends who had died. The times when mania was setting in are particularly suffocating and uncomfortable. Her novels tended to be based on experiences she or her friends & family had, and writing them was rather painful. In a lot of ways, Virginia Woolf never grew up and she needed people- mostly her husband, Leonard Woolf, and her sister Vanessa (Nessa) Bell – to take care of her even during her good times. Very fragile emotionally, she was treated like a precious egg that could break easily. From this book I get the feeling she never knew a moment’s peace from her demons.

The style of writing is rather wordy and full of similes; very unlike most prose of today. It put me in mind of Woolf’s own writing and I’m sure this was deliberate on the part of the author since we spend most of the novel inside Woolf’s head. While it made for rough going at times, I feel that ultimately it helped sustain the feeling of intimacy with Woolf’s thought. I have to say that while I’ve enjoyed other books about Woolf and the Bloomsbury group more than this one, I did enjoy this book and feel it’s a worthy addition to the growing shelf of books about that group. It also has given me an urge to know more about W.B. Yeats, as he comes off in this book as a jovial mystic.

I received this book from the Amazon Vine program for free.