Head Case: My Brain and Other Wonders, by Cole Cohen. Henry Holt, 2015 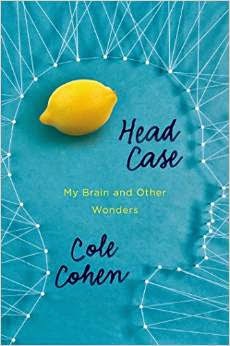 “Head Case” is the memoir of a young woman who had difficulties from birth, but no doctor could diagnose her. Was her problem psychological or neurological? Could medications help her? Would this or that new therapist be able to get her to talk and discover a buried problem? Why did she have no ability with math, little perception of things on one side of her, trouble tying her shoes, and nearly zero ability to find her way around, even in a city she’d lived in a long time? Why was she angry all the time? Her intellect is intact- in fact, she’s well above average. What’s going on?

It’s not until Cohen is twenty-six that she takes MRI and PET tests and the source of her problem is found- a large hole in her brain, a good part of the parietal lobe missing. While this explains her spatial problems, there is, sadly, no treatment for a missing part of the brain. She is forced to go on as she had all her life: inventing ways to work around the problem.

It’s a very interesting medical/psychological memoir. Her problem is not one that anyone else has; people who get this area of the brain damaged later in life from accident or stroke do not function like Cohen does because her brain was able to compensate in large part when she was a baby. The work-arounds she comes up with to survive and thrive are the best part of the book. What’s less interesting is her long term ex-boyfriend – a lot of time is spent on their relationship- but he’s part of her full story. One thing I would have liked to know is whether her constant anger is because of the hole in her brain or a result of the frustrations she faces every day, and whether it’s gotten any better after she got her diagnosis.