A Hand Reached Down to Guide Me, by David Gates. Alfred A. Knopf, 2015 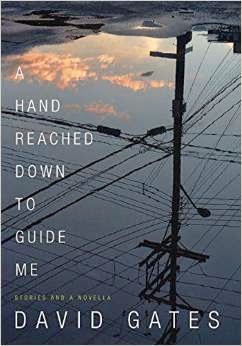 These are not happy little stories. Not that stories need to be happy, of course, but these are depressing in the “this is how life is” kind of way. These are upper class people, for the most part- academics, artists, writers, architects- all people who are well educated. These are people who read Shakespeare to unwind and are too high brow to watch TV- even public TV. These are also people who are very self-aware, which makes you wonder why they continue with their self-destructive behaviors, knowing where it will lead them.

For these are people who seem to be all about sex and drugs and alcohol- but no rock and roll; they listen only to classical. Or perhaps some early jazz. They never met an impulse they didn’t like, and they follow through on them pretty much every time. A lot of the main characters are fighting against aging, and the disappointment of not having lived the lives they feel they deserved. They will not go gently into that good night; they will go staggering and slurring, with bottles of Viagra clutched in their hands as they reach for the next young sexual conquest, talking wittily the whole while.

The stories are arranged in a progression; they work their way through sex, to drugs and alcohol, and finally make it to illness and death. Only the last story-the title story, the death story- ends on a hopeful note, with people acting for the long run rather than the immediate impulse. The characters are nearly interchangeable story to story; person who fails in their profession, aging person trying to hold back time by having sex with younger people, person who has spouse but can’t resist having sex with other people, person who drinks too much/does speed/does heroin/smokes too much pot. I suppose the point of the stories is that we’re all, even the most respected of us, animals when it comes down to it.

The stories may be devoid of likable characters, but they are brilliantly written, rather as if noir was written by intellectuals. I think the self-awareness of the narrators makes the stories different from most. They compel a person to keep reading; it’s like being held by a tale at a cocktail party, held by an ancient mariner in tweed.

Neither of these things influenced my review.
Posted by Laurie Brown at 10:50 AM