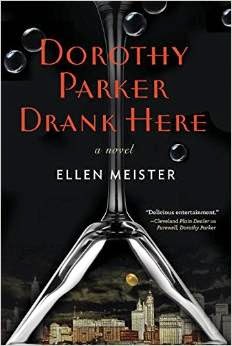 Norah Wolfe has a long standing obsession with has-been author Ted Shriver. When her mother gave her a copy of one of his books when she was 13, his words touched her so deeply she almost couldn’t finish the book. So when the TV show Norah works for gets canceled, she says she can get Shriver on the show, even though they’ve never met. This would be a big deal because many years ago, at the height of his fame, Shriver was accused of plagiarism. He never explained, and vanished from sight.

Shriver is staying at the Algonquin Hotel, home of the famous Algonquin Round Table during the 1920s. There is another guest at the hotel, too, one that while famous goes unnoticed by most. This is Dorothy Parker, in phantom form. She has chosen to stay in the hotel rather than passing on through the white light, and is desperately lonely. She wants to make a deal with Shriver, too.

Shriver, for his part, doesn’t give a damn about either woman. He’s dying of a brain tumor, feels that’s best for the world, and just wants to be left alone in his hotel room with his Vicodin and booze.

There is a great deal of running around; of deals made and deals broken with an ex-wife, an ex-best friend, the ex-best friend’s wife, the sister of the deceased hotel manager, and more. Most everyone is at cross purposes and it’s a miracle anything gets accomplished. It does, though, even though it doesn’t work out the way anyone envisioned. It’s a fun little book, and Meister seems to have Parker’s voice down pat. While most of the plot revolves around Shriver and Norah, Parker is really the star of the book. Which is as it should be.

The above is an affiliate link. If you click through and buy something, Amazon will give me a few cents. This in no way influenced my review.
Posted by Laurie Brown at 1:31 PM