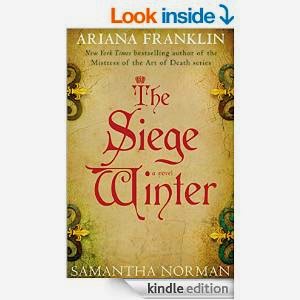 In 1180 AD, an abbot lays dying. He has a story to tell before he goes, though, and calls a young scribe to take dictation. His story takes place in the early 1140s in an England torn apart by the war for the throne between Empress Matilda and King Stephen.

Stolen from her family while gathering fuel in the fenlands, an 11 year old, red haired girl is found by an archer, Gwil:  she has been raped, is nearly dead and is without any memory. He nurses her to health, names her ‘Penda’, disguises her as a boy, and teaches her to shoot both long and cross bows- to great success.

Meanwhile, Lady Maud, possessor of Kenniford castle, is married at knifepoint to a monstrous man who is in it for the money. He rapes her, while his none too stable mistress is installed upstairs in Maud’s castle. His men take over the castle; eating, drinking, and making free with the women. When the Empress Matilda shows up on their doorstep, Maud immediately makes her welcome. It makes no difference to her husband’s men; they’ll all fight for whoever pays them best. Meanwhile, Gwil and Penda have been hired into the Empress’s small force. There is a siege, along with battles, plotting, discoveries of secrets, and a second plot running in parallel with the siege. There isn’t a dull moment. The plotting is well done, especially the way the two plots finally merge. Things are described in a realistic manner- nothing is sugar coated here!

There are several strong women in this book: the Empress, Lady Maud, Penda, and Maud’s serving woman. These women do not wait for a handsome knight to ride in and save them- although it’s certainly nice when one does. They take charge. They are self-sufficient, as women would have had to have been in an era when the men could be gone for months or years. This historical fiction is a far cry from much of what was written in the past, when the women existed to be rescued. I’m so happy that this kind of historical is being written now. Sad that this is the last we’ll ever seek from Ariana Franklin, but based on this book I hope her daughter is inspired to continue writing as she has finished up her mother’s story very, very well. A new ‘Mistress of the Art of Death’ book from her would be excellent!

The above is an affiliate link. If you click through and buy something, Amazon will give me a few cents. This did not influence my review in any way.
Posted by Laurie Brown at 5:15 PM