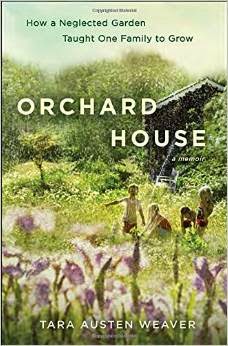 The author’s family wasn’t close- in fact, they’d decided that they worked better living in different cities. But now Weaver’s Seattle based brother has two children and another on the way, and her 70-ish mother decides she needs to move to that city. When they see a very unpromising property- a rundown old house with a huge, overgrown lot with fruit trees and berry bushes- they can’t get it out of their heads. The mother buys the house because of the food producing prospect; Weaver is enthused because her happiest childhood memories revolved around a garden. Her brother doesn’t care.

Weaver’s mother has had a hard life; never loved or wanted as a child she then finds herself abandoned by her husband with one small child and another on the way. As the sole support of her small family, she tried to always have food growing, so that no matter what, the children wouldn’t starve. Now, despite them all living in relative prosperity, she feels compelled to continue with this habit. Weaver sees the garden as an opportunity not just to indulge her love of gardening, but to bring her family closer.

The family story runs parallel with the gardening one; tasks in the garden bringing back memories and allowing for new bonds to be built. One of the problems is that Weaver is the only one who cares about creating family closeness; the mother is gone all summer, leaving the garden work to the author, while the brother and his wife are happy to allow the kids to spend time with ‘Aunt Tea-Tea’ they themselves show absolutely no interest in the garden. They have their own lives. Not only is Weaver battling the wild, overgrown garden and its problems, but her own hang-ups and family apathy.

The book has a slow start, and it jumps around in space and time, so you have to really pay attention. There are some repetitive areas. Two things remain constantly in sight- Weaver’s determination to both grow emotionally herself and to repair her family, especially her mother’s belief that she (her mother) is not worth loving. This is not high drama but the give and take of daily life, and I could certainly identify with some of what they all went through. Of course there were many moments that had the gardener in me nodding my head sympathetically and going “Oh, yeah, been there, done that!” And I’m definitely getting some Shuksan strawberry plants next year.

Neither of these things influenced my review.
Posted by Laurie Brown at 11:40 AM