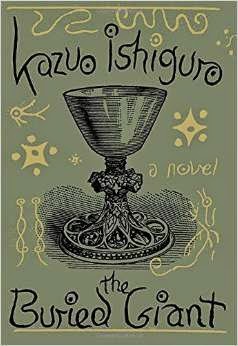 “The Buried Giant” doesn’t tell its story simply. On the face of it, it’s a simple tale. An elderly Briton couple- Axl and Beatrice- not valued by their little ‘village’, decide to pay their son a visit in the village nearby where he lives. On the way they meet a Saxon warrior and his injured charge, a knight, ogres, a swarm of nasty pixies, monks with deadly intent, boatmen who ask an awful lot of questions before ferrying his charges across to islands, and more. Many of these characters are not who they seem to be at first. The knight is Sir Gawain, despite King Arthur being long gone. The boatmen, despite working a real river, are the ferrymen of the dead. Even Axl isn’t the peasant he appears to be.

Axl and Beatrice are in love with and devoted to each other. Beatrice addresses Axl as ‘husband’ and he calls her “princess” – I’m afraid to say that I did laugh a bit at this, being put in mind of ‘The Princess Bride’. They never want to be more than a couple of steps apart.

An odd mist lies over the land; it brings forgetfulness, both of recent events and those long past. It lies in patches, so that sometimes Axl and Beatrice can remember things they previously couldn’t. This leads them to wonder: if there were bad things in their past, would they be better off forgetting them? No, they decide. Those events made them who they are today. But while remembering is good for Axl and Beatrice, it isn’t best for everyone. Sometimes it’s best to let the past be shrouded in forgetfulness for the sake of happiness and peace. Axl and Beatrice can forgive- have forgiven- their past errors; that’s a lot harder for large groups of people.

I read this book over about 24 hours; when I would take a break I needed to shake my head to clear the mists out. The story enchanted me, in the same way that Arthurian legend and Tolkien’s word does, despite being told in plain language without the flourishes or old fashioned language of many myths. I loved this book.

The above is an affiliate link. If you click through and buy something, Amazon will give me a few cents. This in no way influenced my review.
Posted by Laurie Brown at 12:38 PM