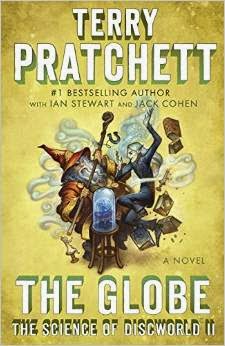 What a sad thing to review this book right after Sir Terry has passed away; sadder still that I have to say that I didn’t really like the book. It was okay; I read the whole thing without finding it a chore, but it wasn’t what I expected. I thought it might be a humorous book on how *Discworld* works, rather than our own.

There are four books in the Science of Discworld series; this is the only one I’ve read. The books are written in an alternating chapter format: Sir Terry writes the short, fiction, chapters and Stewart and Cohen write the longer, nonfiction, ones. The fiction portion tells a tale of the wizards of Discworld and a misadventure while doing a team building exercise in the forest. They find themselves interacting with Roundworld, a globular world where magic doesn’t exist, but elves do. Thinking this situation is unfair to the humans, they first eliminate the elves from Roundworld. Then they discover that this was a horrible mistake, as humans need to believe in magic in order to thrive and progress- even though the magic is imaginary. They have to go through great effort to correct their meddling.

The science part of the book covers a lot of different subjects; quantum physics, evolution, psychology, religion, time, multiverses, culture, and philosophy. It’s all in terms that most will find accessible, but there is some repetition.

It’s an attempt to get lovers of fantasy to read science-y stuff and sneak some education down our throats, sort of like a grown up version of Mickey Mouse teaching kids about math or something. It works, but not terribly well. The wizard story is just barely held together; the wizards do something, and then they stop and what just happened is explained to us. By the end of the book, I remembered a lot of the science but little of the story. While Cohen and Stewart wrote the science sections, I swear I see Sir Terry’s hand in that; the footnotes are some of the funniest stuff in the book.

Final verdict? Certainly not my favorite Pratchett, but if I see the other three in the series I’ll probably read them. Just not that eagerly.

The above is an affiliate link; if you click through and buy something, Amazon will give me a few cents. This in no way influenced my review.
Posted by Laurie Brown at 5:17 PM