Empires of Food: Feast, Famine, and the Rise and Fall of Civilizations, by Evan D.G. Fraser and Andrew Rimas. Free Press, 2010 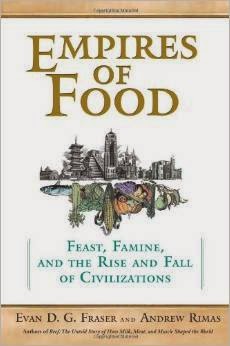 I was loath to put this book down once I started it. It held my interest like a well-crafted novel would- for the most part. The author’s premise is that empires expand when they have good sources of food (mainly grain), and then, when the food sources fail the empire collapses. They present the Mayans, Mesopotamia, the Romans, the British Empire, modern China, and modern America among others, and they paint a pretty scary picture.

Sadly, their scholarship doesn’t match their writing. The British Empire didn’t fail because of a shortage of grains. Some of the dates given are just wrong; in at least one case, that makes what they are saying impossible (that a certain event caused something).

The book jumps around in time and place; I found it rather jolting at times to make the connections. For some reason, they felt they could bind a lot of the events together with the story of the world roaming trader Carletti, but they don’t even give him a continuous narration. He really had nothing to do with their thesis.

What was good about it? It does examine food surplus and scarcity. To be a food empire, the empire must be able to produce or capture a surplus of grains. They must be able to ship it to all its area, and trade it for other things, both necessities and luxuries. Having more food than your own population also gives a society another, very important, thing: when there is enough food that not everyone has to be a farmer, people can do other things, like learn to read and write, become artisans, and go exploring. Being able to have a non-farmer class gave us civilization.

They also go over why the food surpluses ceased to be. Irrigation that created over saline soils, loss of soil nutrients, loss of soil itself due to erosion, lowering of average temperatures by even one degree makes plants take longer to ripen grain, lack of rain- all these things can create disaster. And we are facing that again today: today we face climate change, soil erosion, drought, and the fact that the vast majority of grain growing (and, hence, meat producing) relies on petroleum inputs- and we are fast running out of petroleum.

The authors do not have an answer to our possible/probably plight. One thing they do suggest isn’t something that will work for most areas of the world: becoming locavores. Eating only foods grown within a circumscribed area at least remedies the amounts of fuel used to truck and process foods. Now, a big city, with all its suburbs, covers a huge area with blacktop and concrete and will have few areas for growing foods- and it takes a LOT of area to grow grains and frankly no one wants a pig farm next door. Our area, despite being rural, cannot successfully feed itself. The soils are not rich enough to support much beyond grass hay and cattle. The growing season is too short to ripen grain a lot of years- not to mention many fruits and vegetables. It’s possible on a small scale to ripen peppers and tomatoes by protective coverings but it would take a LOT of greenhouses to feed the county year round.

What this book does is point out a lot of different aspects of food supplies and make you think about them. For that I give it four stars.

The above is an affiliate link. If you click through and buy something, Amazon will give me a few cents. This in no way influenced my review.
Posted by Laurie Brown at 3:11 PM