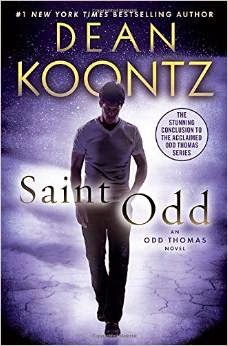 “Saint Odd” is (supposedly) the last volume in the Odd Thomas saga. In it, Oddie is back in his hometown of Pico Mundo in the California desert. He knows that it is here that he has to make what will probably be his last stand. He doesn’t mind if it’s his last stand; a fortune telling machine told his girlfriend and him that they would be together forever- and she’s dead now. The satanic cult he’s battled before is after him, as well as planning something horrible for the citizens of Pico Mundo.

Odd doesn’t see himself as a hero. He is humble, helpful, always polite, and only wants to do the right thing. But he has certain gifts- he sees the dead, has certain intuitions, and can home in on people unerringly- that have put him on the path of saving Pico Mundo and possibly the world.

There is a lot of action in this story; it’s the most violent of the series. The satanic cult is not made up of nice people; they glory in their killing. Odd just does what he needs to do to save innocents. And he has a lot of help- a lot of people from earlier in the series show up. There are false leads and dead ends and lots of running about. It’s a good story.. but… not perfect. There are a lot of things left unexplained- who is Annamarie the eternally 8 months pregnant 18 year old? Who are, really, the group that Edie Fischer belongs to? What are the horrible things that must be fought in the next world after this? (and why weren’t there bodachs around? Damn things are always around when death is apt to occur). These things lead me to believe that this might not be the last in the series- which would please me a great deal, as well as allowing these loose ends to be tied up.

The above is an affiliate link.If you click through and buy something, Amazon will give me a few cents. This in no way influenced my review.
Posted by Laurie Brown at 3:18 PM