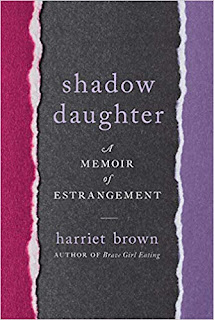 Harriet Brown admits she led a pretty good childhood; she was not physically abused (much), she had food and clothing, hers was not a broken home. But her mother was emotionally abusive, tearing Harriet down constantly. No one could praise Harriet without her mother cutting in, and telling them they didn’t know Harriet like she did, that Harriet was in fact a horrible child, self-centered and selfish. Harriet got out of the house as soon as she could, at 16, but it was hard to overcome the drive to stay close to her family. Our society says the family is important, and that you are screwed up if you aren’t close to them. Finally, she had enough, and severed ties with her mother, not just for her benefit but for that of her own daughters.

The author mixes her own story in with those of others, and with psychological research. This isn’t just her complaining; emotional abuse IS abuse, and it can scar a person for the rest of their life, causing them to not trust themselves. I have a couple of dear friends who have/had abusive mothers, and they have both had to cut off communications for the sake of their sanity.

She may have been five thousand miles away when her mother’s funeral took place, but it was for the best. The rest of the family wouldn’t have wanted her there, and it would have been hypocrisy for her to weep and wail. She had already wasted hours, days, weeks of her life trying to appease her mother, trying to get her approval. Now, approval and love would never come.

I think what I found even more chilling than her mother’s treatment of her was her father’s ignoring it. He said to the author that if he didn’t take her mother’s side, she would leave him. He picked his wife over his daughter. After her death, he said he did not want to hear from her for a long time. They are slowly rebuilding a relationship, with him learning to like her, to see her as she really is rather than through the lens of her mother’s hatred.

While there is some repetition in the book, it’s well written. I felt pain for what the author went through. I think this book is an important one for adult children of emotionally abusive parent’s to read.