A Student of History, by Nina Revoyr. Akashic Books, 2019 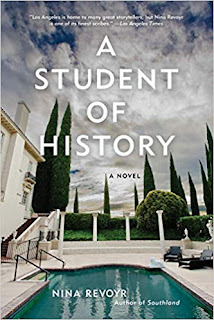 Grad student Rick Nagano’s life isn’t going well. He’s been stuck on his thesis for months and sees no future for it, his grant is about to run out and not be renewed, and his girlfriend has dumped him. Then things turn better: his friend is leaving the country, and leaving her job as a research assistant to a rich woman. She’s recommended Rick for the job. When he auditions for the role, Mrs. W_ takes him on. His money woes, at least, are cured for the moment.

His job for Mrs. W_ is to read through her old journals and make a computer document out of them. This, he realizes, may also solve his thesis problem: to a historian specializing in Los Angeles history, the journals are a heretofore unseen look at the lives of the upper crust in the early and mid-20th century. Of course, Mrs. W_ has sworn him to never reveal anything in the journals... but he’ll worry about that later. Meanwhile, Mrs. W_ is also using him as a ‘walker’- a man who a rich woman/celebrity uses as an escort to social functions. She sends him to the finest stores and dresses him up. Behind the walls and hedges of Bel Air and Beverly Hills, the rich and beautiful people- people known as ‘street people’ because the streets of Los Angeles are named for them- mingle and exchange gossip. These are not media celebrities; these are the descendants of the oil barons and land developers of yore. Rick is surprised when one young married beauty, Fiona Morgan, takes an interest in him. Could things get any better for him?

This is a mystery on the surface, but it’s also statement (a damning one) on class and money. Rick brings up his mixed race heritage frequently, but nothing is ever done with that thread. There is frequent reference to the fact that everyone is very, very white. Rick is almost unbelievably naïve. While I didn’t dislike Rick, I couldn’t manage to like him, either. He’s a narrator that things happen to, without him making much effort. He’s a tool, in a couple of meanings of the word. The other characters… not much to them, and I think that might be intentional. These people have nothing real to them! It is a good depiction of the over the top excesses of the very rich, and what LA history might have been like for those very rich. But I can only give it three stars, because I never found myself really invested in the story.