The Five: The Untold Lives of the Women Killed by Jack the Ripper, by Hallie Rubenhold. Houghton Mifflin Harcourt, 2019 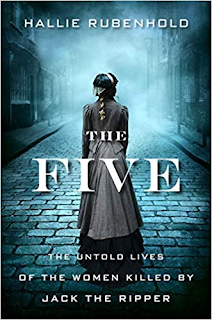 In 1888, five women were killed by the person who would be called Jack the Ripper. The killings were horrific- they weren’t just killed, but disemboweled- and the newspapers of the time made a mint writing sensational stories about them. They characterized the women as ‘prostitutes’, and nothing more was known about them. The image was that they were out on the street and were slain while working. In reality, while all the women were frightfully poor, only one was a sex worker, and she was killed in her bed at home.

The author brings the five women to life. I was amazed at how much could be learned about these women from existing records. Census records, records in the old workhouses, prison records, pension records, ledgers for various businesses, military discharge papers, school records, registers of births, deaths, and weddings- she must have spent a huge amount of time, combing through these primary resources. Then a huge number of books that were about conditions in Victorian days, which painted the backdrop for the lives of these women. It turns out that they led hard lives; that they had been homeless at times and had to sleep outside, they had been in workhouses, that they were all victims of alcoholism, and that society was pretty much set up against them from the start. The poor rarely had access to schooling, so jobs other than manual labor were closed to them. Women were paid very little for their labor; they almost had to have a man for the income if they wanted to live inside. If their man cheated, beat them, spent all the money on alcohol, or left them, they were up creek. One of the women *did* have a man, but on her last night there was only enough money for one of them to sleep inside, and it was her turn to sleep outside.

This book portrays them women who didn’t always make the right choices, but they had precious few to choose from. They had all the hopes, dreams, and cares that everyone has; they were not just put on earth to be victims of the Ripper. It’s about time they are shown to be human beings. ‘The Five’ does this admirably.