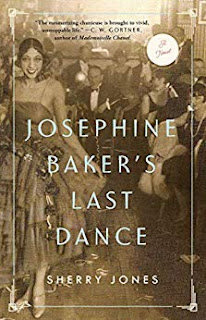 Josephine Baker, born in 1906 to a poor family in St. Louis, was used pretty much as a slave from the time she could walk. Her mother put her out to white families as a live in servant, with Josephine’s pay going to her. Josephine never saw anything of it. Worse, she was sexually abused starting at an early age. But she was determined that she would be a dancer and singer; it was the one way she could see out of her impoverished situation. She just needed to get a chance….She was told by producers that she was too skinny, too dark, and didn’t have a strong enough voice to be a chanteuse. She was relegated to the chorus line in all people of color reviews.

But in 1925 she sailed to Paris and started breaking down barriers. She was the first woman of color on a Paris stage, the first to star in a movie, the first to sing in an opera. But her most famous act is, sadly, something that started as sarcasm. She was designing her own costumes in Paris. The man in charge, however, thought she was trying to dress too elegantly. So she drew her next costume as a skirt (a belt, really) of bananas and nothing else. That, of course, is what the costume maker produced and that is what she danced in for many performances, and that is the picture that will come up first when you Google her.

In Paris she was received as an equal, not some subhuman servant like she was see in the US. She was the center of any party, the star of the stage. She rubbed elbows with the American ex-pats. Of course, the Nazis came and everything went to hell. So she did what any rebel would do- she joined the French Resistance. As a star and party giver, she had access to the Nazi bigwigs who didn’t know she spoke German. She risked her life giving information to the Resistance- and then spent time flying supplies for the Red Cross.

This was all exciting. After the war she led a much quieter life. She adopted 12 children, of different races and cultures. She tried to come back to the US, but found herself denied service in restaurants and denied rooms in hotels. She was treated like dirt.

I loved the book, but the last part of her life was rushed over. What became of all her children? What kind of relationships did she have with them? After her last big performance- a production that frames the story- what did she do? I know she worked for equality.  How did she die? Who was with her then? But it’s still a five star book, because I couldn’t put it down. She was a fascinating woman, and lived her life to the fullest.