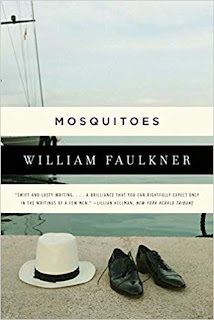 “Mosquitoes” was the second novel Faulkner wrote. It’s a satire set in New Orleans, and while it’s amusing it’s not really laugh out loud funny. It’s a sort of “Ship of Fools” but with a smaller boat and possibly more foolish people.

A woman of means, Mrs. Maurier, who wields power in the art buying world, arranges a boat party for a few artists and writers. Her niece and nephew are also included, and they snag a couple of other people they’ve never even met before, right off the dock. This mismatched group, who apparently didn’t think things through, finds themselves on Lake Pontchartrain for several days. Mrs. Maurier seems to expect artistic conversation and jolly dances. Instead she gets people who stay consistently drunk and who try and seduce each other. And complain about the fact that they are served grapefruits at every meal. The boat runs aground, some of them try and swim to shore and walk back to the Big Easy, another someone disappears.

These are some of the most annoying people on earth. If I were stuck on a boat with them for days, I’d go overboard, too. It’s fun to read about them at times, but I have to admit I was bored part of the time, too. There is a good bit of repetition. I had trouble remembering who was who- three of the men seemed interchangeable (one was even called “the Semitic man” instead of named most of the time!) and a couple of the young girls did, too. They are the true parasites of the story, not the mosquitoes which, while biting constantly, are never named. None of the women are portrayed in a good light. Three stars.