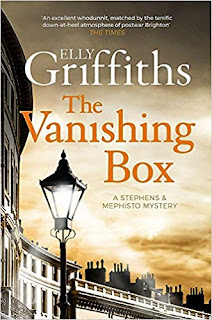 Set in 1950’s Brighton, this fourth installment in the authors Magic Man Mystery series gives us Max Mephisto- one of the Magic Men- and his daughter, Ruby, playing a gig at the Brighton Hippodrome. On the same bill is Vic Cutler’s tableaux vivante, where almost naked young women stay perfectly still while arranged in various historical or artistic scenes. Meanwhile, in the boarding house where two of Cutler’s ‘girls’ live, another tenant has been found murdered and posed to ape a famous painting. This brings the other Magic Man, DI Edgar Stephens, into the story. Bodies quickly start piling up, as Cutler ends up dead, followed by a girl in the show, and soon there is nearly a cast of thousands, or so it seems. There are a lot of twists in the story; the guilty party wasn’t anyone I suspected. I did find myself getting confused with so many characters and their various relationships; I think in part because I haven’t read the earlier books in the series. But it’s a fun read, with the theater sections adding something unique. Four stars.