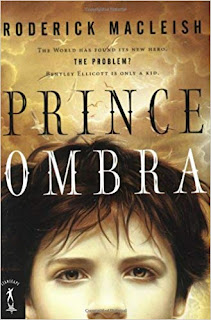 Eight year old Bentley Ellicot is bullied by boys in his town because he has a limp. He’s never had a friend until he meets Sally Drake in the physical therapist’s waiting room. She’s there because she can’t talk- or, at least, not so that anyone can understand. But Bentley has no problem understanding her gibberish.


Bentley is unusual in ways besides his limp. He was born knowing he’s lived many times before. He’s always been a hero every time- Arthur, Hercules, Gilgamesh, and others- and each time he’s defeated the face of evil: Prince Ombra. Ombra brings evil into the hearts of humans, affects the weather, and brings misery in general. Bentley has learned magic spells from horseshoe crabs and the wind. Now, with another round with Prince Ombra coming up, he has Sally as well as Dr. Kreistein, their Jungian therapist and mythology scholar. But while he’s got the power of the ages to draw on, he’s still only an eight year old boy….


Pretty good fantasy. I liked the world building. I liked the kids and Dr. Kreistein, although I wasn’t over fond of Bentley’s father- he succumbs to Ombra’s influence annoyingly fast. One thing I found odd is that there is no explanation of the evil that infests our world when Ombra is dormant, but maybe it’s a thing where we have balance, rather than Eden, until he shows up. Four stars.
Posted by Laurie Brown at 3:26 PM