Nickel and Dimed: On (Not) Getting by in America, by Barbara Ehrenreich. Metropolitan/Owl Books, 2001 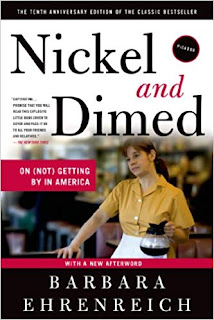 Way back in 1998, author Ehrenreich decided to go and try and live like the lower class did. Allowing herself a car and a $1000 in startup money, she went out to land a working class job- waitress, hotel maid, house cleaner, nursing home aide, Walmart associate- and survive on the wages. She discovered how wages didn’t cover rents, or much food, or any way to relax. Most people were working two or even three jobs just to survive. Most often, there was no affordable housing near any source of employment, and there was no affordable transportation. If a worker got ill or injured, they had no option other than to just keep on working. The working class can’t afford to miss work, even if the doctor visit was covered by insurance- and it usually wasn’t back then. Affordable child care simply didn’t exist.


Of course, she wasn’t stuck in this situation. She could tap out at any time and go back to her normal existence. She didn’t live with the knowledge that she would have to live this existence for the rest of her life, with no vacation, no retirement. So she didn’t develop the despair and depression that plagues so many working class people. But she noticed it and reported it. Many people have torn down the author for ‘slumming’, because she could leave, but I feel she wrote an important book because many people were unaware of the situation the working class faced. One person could scarcely cover the entire problem. I did find some things irritating- her fear that she wouldn’t be able to ‘pass’ as a working class person, that her education would out her. Guess what- not every working class person speaks poorly, and there are such things as libraries that allow even the poor to read. One thing that I feel is important about this book is that it showed to the upper classes (if they choose to read it- hah) that even one of their own, a hard working educated woman, couldn’t make it in the system. So much for calling the working class ‘lazy’!


These days, there is a lot more awareness of the problems of the working poor- but I’m not sure there is any more being done about it. Rents are higher, gasoline costs are higher, but wages are the same as they were 20 years ago. There are still huge numbers of people without health insurance. Perhaps it’s time for a reissue of this book, with an update? Five stars.
Posted by Laurie Brown at 1:27 PM