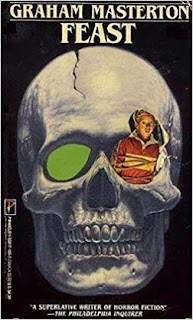 Charlie McLean is a restaurant critic who is on the road constantly, eating his way around America for a company that makes up guidebooks. A non-custodial parent, he now has his son, Martin, with him for three weeks, in an attempt for them to get to know each other. An encounter at a (bad) roadside diner leads him on a quest to find Le Reposoir, a secret, private dining club. While he’s seeking this, a member of a cult religion is talking with Martin…and convincing him theirs is the One True Religion. Not only that, but Martin is their Savior. When Martin disappears, Charlie is surprised to find how extensive this cult is and how much power they have… and their Second Coming is NOW.


This is typical 80s gore fest, although it does have some interesting quirks that make it stand apart from the chain saw gang. The cult’s religious thesis is a new one. I’m afraid I just couldn’t manage to like Charlie; there is nothing wrong with him but he just rubbed me the wrong way, although he did the right things in the end. The author’s portrayal of women is annoying; they don’t seem real at all, just ornaments for Charlie to have sex with. But the book held my attention, although it seriously dragged in the middle. Three stars.
Posted by Laurie Brown at 3:59 PM