Crux: A Cross-Border Memoir, by Jean Guerrero. One World, 2018 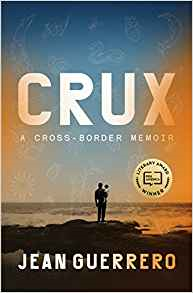 Jean Guerrero had a hard childhood. Her mother, a Puerto Rican physician working in San Diego, kicked her father out when Guerrero was 6- for understandable reasons. Her mother’s parents, who at times were the children’s caregivers, had some very odd ideas about child rearing. Her father, Marco Antonio Guerrero, was not around much, and when he was, he wasn’t much of a parent. Having mental illness but unwilling to acknowledge that, he self-medicated with, well, pretty much every drug that exists and huge amounts of alcohol.


The author majored in journalism and became a reporter for the Wall Street Journal, based in Mexico City. She used this situation to dig into her father’s culture and past. Turned out his family had a number of shamans in it, ending up in a sort of Castaneda territory. His parents and siblings, though, started a meat packing business that was making decent money with Marc Antonio running it. His half-sister edged him out, though, and that is when his problems really started, a downward spiral that included a tin foil hat along with the self-medicating. A voracious reader, he was a genius about repairing and creating things but couldn’t keep a job.


There is more than one crux in the story; the physical border between the US and Mexico, the border between mysticism and mental illness. The story wanders around in time and place, and I found this confusing in places. There is some repetition. There were sections that were so fascinating that I couldn’t put the book down, and other places I really wanted to skim or give up. Four stars out of five.
Posted by Laurie Brown at 3:25 PM