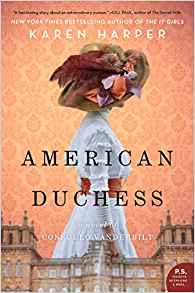 Consuelo Vanderbilt was brought up strict by her socialite mother, Alva. Taught all the things a society lady was supposed to know, and confined to a corset with a steel rod in the back to make sure her posture was perfect, she was expected to marry well and provide heirs to continue the line. When the Duke of Marlborough showed some interest, a deal- strictly a business deal- was made: Consuelo would get to be an English duchess, and the Duke would get the money he needed to save his palace and live life the way he wanted to. Problem was, Consuelo was already in love with another man. Under threats from her mother, Consuelo gave in and married the Duke. She was now a provider of huge sums of money and of heirs.


Consuelo wasn’t one to just sit around and spend money, though. She was quite the philanthropist, and was active in the women’s suffrage movement. She did her part during WW I, running a sort of hospital. And she finally left her husband so she could live her own life.


It’s an interesting book and I enjoyed reading it. But it has some flaws. First is that Consuelo is flawless; she is never in the moral wrong. Of course, it’s written in the first person, so that’s kind of to be expected. The second is that I feel like the book was possibly written for the Young Adult crowd, even though it is being advertised for adult readers. Finally, there is a bit of a flat affect. None of the characters- not even Consuelo- really come to life. And one (Alva) makes a total 180 degree turn about in character, which seemed odd. Four out of five stars.
Posted by Laurie Brown at 1:39 PM