Creatures of Will & Temper, by Molly Tanzer. Mariner Books, 2017 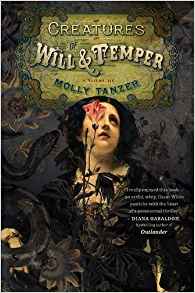 When Evadne Gray catches her younger sister, Dorinia, dallying with another teen aged girl right after the man Evadne loves informs her that he is marrying someone else, Evadne runs to their mother to tell and assumes it will put a stop to Dorinia’s planned visit to their uncle in London. (Dorinia has the ambition to become an art critic, and there is no art to be seen out in the country where she lives.) Instead, their mother decides that Evadne will accompany Dorinia, something Evadne has no interest in doing.

Upon arrival at their uncle’s house, they meet his friend Lady Henrietta Wotton, who goes by Henry and wears men’s clothing. Dorinia is immediately smitten by Henry, and Henry has taken it upon herself to introduce the girls to London. Evadne is shocked and revolted by Lady Henry because of her dress and open smoking. But Evadne has learned to fence and is thrilled to have an invitation to a fencing school from both Henry and the friend (and erstwhile boyfriend) who taught her. While still living with their uncle, Evadne and Dorinia go their separate ways.

Dorinia manages to convince Henry to invite her to a meeting of her secret society. The meeting seems totally harmless- a dinner devoted to one of the sense, so she cannot imagine why it’s considered secret. True, there is a short time where Dorinia is asked to step outside the room, but what could go on in that small space of time?

Evadne is taken on by the top instructor at the fencing school, and finds herself invited to a secret club, too. And she is shocked to discover that there is some common ground between that club and Henry’s…

The story took a very long time to get moving. There was a lot of gorgeous description, perhaps too much. There is a lot of going and coming and eating. I found it hard to really like any of the characters- I didn’t *dislike* them, but they just left me flat. I found it hard to believe that Evadne, who attends a fencing club where she is the only woman, is shocked and disgusted by Henry’s wearing of male attire, especially since she is unshocked by homosexual love. (yes, I know that homosexuality and cross dressing are two different things. But it just seems to me that if a person is okay with one, they’d most likely be okay with the other) I found it equally hard to believe that their uncle, who had left the secret society, would allow Dorinia to go. The book *almost* made me love it, but not quite. It’s a first novel, so I have great hope for this author. And the cover is absolutely gorgeous. Four stars.