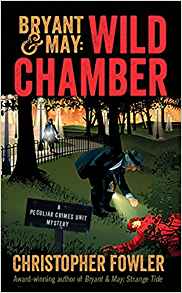 The story starts with a ‘locked room’ murder- a woman is killed in a locked park, accessible only to flat owners and the gardener. The gardener doesn’t look good for the crime, but who else could have gotten in and back out when there is only one key per flat owner? The crime is odd enough that it lands in the laps of the Peculiar Crimes Unit.

Bryant and May are the old codgers who are the heart of the PCU. May plays straight man to Bryant’s over the top eccentricities. Bryant is a little more eccentric than usual right now; the meds he took to overcome a serious illness have left him with some delusions: he likes to have a chat now and then with hallucinations of people both dead and alive (QEII is one of them, as is Samuel Pepys). Thankfully, these hallucinations help him think things through, rather than being detrimental.

Another murder in a park, with similarities to the first, raises the specter of a serial killer. Because it, too, takes place in a park in London, a higher up in the police department decides to shut down all the city’s parks, and blames it on the PCU. If they would solve the murders, he’d reopen the parks. He seeks to gain monetarily if the parks can be privatized and locked. But the murders go on. Can the PCU solve them before the case is taken from them and given to the regular police force, and they are shut down for good? More bodies pile up- including those of suspects- as more and more pressure is put on the PCU.

While this is I think the 14th novel in the series, it is the first one that I have read. I thought from the description that the Peculiar Crimes Unit would be about supernatural crimes, rather like the Rivers of London series. It seems that they are not, but I am sure I’ll be picking up more of the series as I have become quite fond of the staff of the PCU, including Crippen the staff cat. What other police unit has a secret tunnel entrance through a bakery, a tunnel that has a medieval sarcophagus in it? I loved this book. Five stars.

Neither of these things influenced my review.
Posted by Laurie Brown at 12:03 PM

Email ThisBlogThis!Share to TwitterShare to FacebookShare to Pinterest
Labels: mystery