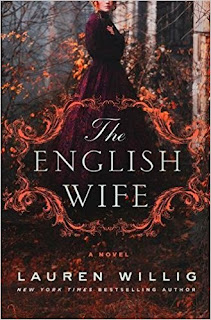 The story starts right in the middle of the action: On frigid Twelfth Night, 1899, in the middle of a Shakespeare themed ball, Janie Van Duyvil and her cousin Anne find Janie’s brother Bay dying of a stab wound and his wife, Annabelle, missing, presumably fallen into the river below the folly. As part of high society, the couple’s murder is front page material. The press descends in droves, speculating on the deaths. Did Annabelle kill her husband, then flee? Was it a love triangle, as there were rumors that Annabelle was having an affair with the architect of their new house? Did Bay kill Annabelle and then himself?

From there out, the story alternates time lines: the 1899 present, as Janie seeks to find the truth behind the murders, and the past, when Bay and Annabelle first met and courted. Janie finds herself pairing up with James Burke, a newsman working for a paper with a bad rep who wants to write real news.

Annabelle and Bay have secrets, lots of them. To tell here would ruin the book for readers; suffice it to say that neither is who they appear on the surface. But it’s not just their story. It is also the story of Janie. At the start, Janie is the person who melts away into the background. Her mother is a verbally abusive control freak, and Janie is her favorite target. She’s spent a life time learning to disappear. Her cousin Ann even stole her fiancé. Her growth and flowering through the story is wonderful to watch.

There is a lot of description of all the trappings of wealth; the clothing, the jewels, the house décor. And while it might seem a bit excessive, it really belongs there: the wealth, the society it embodies, is, if not a character, is certainly a force in the story that exerts itself mightily on the characters.

I enjoyed this book a lot, especially the characters of Janie and Annabelle. The identity of the killer actually took me by surprise. Five stars.

Neither of these things influenced my review.
Posted by Laurie Brown at 6:56 PM