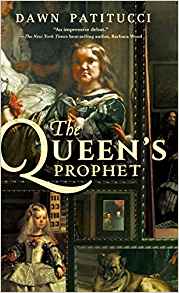 Maria-Barbara is middle aged when the Countess of Walther, her owner, dies. The Countess’s family doesn’t want her, which leaves her future up in the air. On a trip into town, Mari encounters a traveling street magician who quite quickly convinces her that she could make a living as a seer. Mari takes him up on it, figuring that making her own living, even as a fraud, beats an unknown future. Middle-aged dwarfs are not in high demand in 1600s Germany.

Dwarfs of whatever age, however, are in demand in the Spanish court. They are entertainers, dancers, buffoons, good luck charms. The Queen has heard that Mari is a prophet. In a court where everyone is plotting, a good luck charm and prophet can be very useful. Mari is terrified; she knows nothing about prophecy. What will happen when they find out she is a fraud? Some good luck, some knowledge of astronomy and math, and a quick mind help her make her place secure, at least as secure as anyone can be in a court full of intrigue and backstabbing. Even the Queen is insecure.

The story was inspired by a painting by Velasquez, ‘Las Meninas’, in which the focal point is the beautiful Infanta of Spain, but rather than focus on her or the Queen, the author chose Maribarbola, who stands to the side of the painting. This outsider’s view of the court has a very different feel from what it would have if the author had made the Queen the protagonist. The story also takes liberties with time; she condenses several years into a short time, making for more exciting reading.

The author paints the court of King Philip and his niece/wife Queen Mariana vividly, bringing it to life with lush descriptions of the clothing, the buildings, the plantings, the food, the drink. Lots of food and drink. I knew nothing about this period but found it extremely interesting and I was completely drawn into the story. Mari came to life with her fears, her triumphs, her physical pains, her hangovers, and her concern for the Queen. Four and a half stars.

The  above is an affiliate link. If you click through and buy something- anything- from Amazon, they will give me a few cents.

I received this book free from the Amazon Vine  program in return for an honest review.

Neither of these things influenced my review.
Posted by Laurie Brown at 8:41 PM