The World of Tomorrow, by Brendan Mathews. Little, Brown and Co 2017 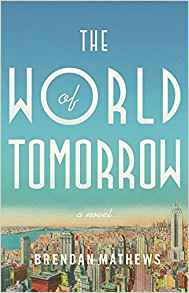 The story starts with Scottish Sir Angus traveling from Great Britain to New York on the Britannic, first class, of course. With him is his grievously injured younger brother, Malcolm. The purpose of their trip is to seek medical care for Malcolm. His fellow travelers are very impressed with him, and plans are made to see him further after arrival in New York. The only problem is that he is Irish, his real name is Francis Dempsey, he is an escaped criminal (for selling French postcards and the like), and his money is stolen from an IRA safe house that he accidently blew up with their own explosives. He is on the run and doing it with style.

Michael (Malcolm) was caught in the explosion and has suffered hearing loss and a severe concussion. The only one he can hear now is the ghost of W.B. Yeats, who spends a lot of time with him.

Meanwhile, oldest brother Martin (he has no fake Scottish name) emigrated to the US years before and has been making a living (albeit a poor one) as a jazz musician. In the middle of preparing for his sister-in-law’s wedding, he is assembling an amazing jazz band that will cross color lines – something not yet done in 1939. He is also out of a job as a horn player, something which has upset his wife very badly. She’s taking care of two toddlers in a rundown apartment and wishing for something more than constant drudgery. So when Francis barges into their lives, with money and problems, she doesn’t know whether it’s a good thing or a bad thing- but it’s probably bad.

Nobody kills IRA operatives and steals their money and gets away with it, no matter how far they run. An Irish gangster in New York finds Francis and gives him an ultimatum: do what I ask- a job which will no doubt be fatal to Francis- or his family will all be killed. Oh, and Michael, unable to communicate, has wandered off.

It’s a big, sprawling, book with numerous narrative streams. The characters range from the very rich to the very poor. There are gangsters, people who want to be EX gangsters, royalty, extremely neurotic people, artists, and every other kind of person. I enjoyed the story, although sometimes I had trouble remembering the narrative stream of one character after reading about others for many pages. Part of the enjoyment I found was the descriptions of everything that was happening in NYC at the time: the World’s Fair, the receding Depression, the burgeoning jazz scene especially in Harlem- NYC was alive with change. Four and a half stars.

This in no way influenced my review.
Posted by Laurie Brown at 4:03 PM