Wallis in Love: The Untold Life of the Duchess of Windsor, the Woman Who Changed the Monarchy, by Andrew Morton. Grand Central Publishing, 2018 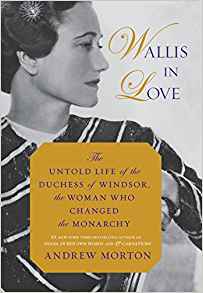 In June of 1896, Bessie Wallis Warfield was born. In November of that same year, her tubercular father died. Her mother was two months pregnant when they married, which gave her a bad start in the social life in the south. Her mother’s father and step-mother did not offer to take them in. The only family that offered to take care of mother and child was uncle Sol Warfield, who Wallis thought of as a grumpy miser. He allowed them to live with him, and provided enough money to feed them, and eventually paid for Wallis’s education. This stung Wallis; she never had enough to please her. An apocryphal story says that Wallis’s first words were “Me, me!” rather than “Ma, ma!”

Her uncle made sure she entered into society, and she wasted no time in marrying. Her first husband was a Navy pilot who adored her, but he was an alcoholic and would never be rich. The circles he ran in, however, allowed her to meet people with more money; her second husband was a shipping broker who could provide her with the life to which she wanted to become accustomed to. And that allowed her into even higher circles; she met the Prince of Wales. And he became infatuated with her; he showered her with gifts and attention, while her husband thoughtfully stayed in the background- he had a lover, too. Soon, it seemed, she would be able to become queen. The only problem was that, even if she divorced her husband, as a twice divorced woman, and a commoner, she was ineligible to become queen. They could marry if they wished, but she wouldn’t have the title.  Or he could abdicate his position. This was unacceptable to her. Meanwhile the king had died and Edward was on the throne that beckoned to Wallis. Against her wishes, Edward abdicated, leaving him free to marry but denying Wallis a royal title. Ever after, she treated Edward shabbily.

But none of the three men she married was the love of her life. That was Herman Rogers, a long time close friend who frequently managed her affairs (financial, that is). On the eve of her marriage to Edward, she went to the happily married Rogers and offered to have his child. He never took her up on her offer.

Wallis was a thoroughly unpleasant person. She took everything she could and did not give back. Her wit was biting and cruel. The man who gave up the throne of England for her was treated as a servant in his own house. It’s a good thing for the world, however, that she did seduce him- he was pro-Nazi and thought Hitler was a fine fellow (so did Wallis- they had dealing with high up Nazis). If it had been him rather than his brother on the throne, WW 2 might have turned out very differently.

I can’t say that I like Wallis one bit more than I did before after reading this deeply researched account of her life. Even her aunt who always took her side didn’t believe that Wallis had ever done anything worthwhile. She was simply famous for being famous. I do, however, understand her better. She grew up in poverty in the middle of people who had more. Her first marriage had her living in shabby circumstances. But rather than work her way to better things, she used men for that.

I found the book very interesting and well written. I have to admit that reading about Wallis was a bit tiring because she was such a dreadful person and an inveterate liar. I give the book five stars, because there is no way any biographer could make her look good. The author managed to hold my interest despite my dislike of the subject.